ALA Unit 1 in DC knows that AmeriCorps members get things done for America, since several unit members are AmeriCorps alums or help administer AmeriCorps grants. In honor of the 20th anniversary of AmeriCorps, we’re sharing this post about one of our members doing both. Sharon Riegsecker has been a member of the American Legion Auxiliary since 1999; currently she’s serving as secretary/treasurer and is charter member of ALA Unit 1 in DC.

This post originally appeared on the American Legion Auxiliary National website in celebration of AmeriCorps’ 20th Anniversary on September 12, 2014.

Since its project start in 2009, the American Legion Auxiliary Call to Service Corps AmeriCorps Project has placed 213 Americans into AmeriCorps assignments with 57 organizations to build their veterans and military missions. As part of the AmeriCorps’ 20th Anniversary, the ALA asked some of its current members and alumni, who happen to be members of The American Legion Family, to share why they serve/served in AmeriCorps. 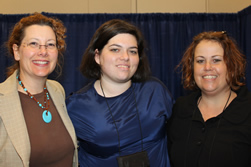 Sharon Riegsecker answered the ALA’s call to service as an AmeriCorps VISTA twice. Shortly after graduating from college, Sharon was asked to consider applying for an AmeriCorps assignment at her school with Campus Compact. Unsure how anyone could survive on the living allowance, she declined. When the opportunity to serve with the American Legion Auxiliary come up 6 months later, she jumped at the opportunity to serve…even if it meant moving over a thousand miles away. Sharon grew up in the Legion Family, and saw AmeriCorps as a way to give back to the organization that gave her so much growing up.

Eligible for the ALA through her mother’s service in the U.S. Army, Sharon has always been a “boots on the ground” member, and she used that background to help develop a suite of “how-to” sheets to help Auxiliary chapters across the country provide practical support for veterans, military servicemembers, and their families. After a short break, she answered the AmeriCorps call again to help develop the Community Blueprint initiative as an AmeriCorps VISTA Leader to empower communities to support their veterans, servicemembers and their families.

After completing her second term of service, Sharon accepted an opportunity to work full-time for the American Legion Auxiliary, where she now helps administer the ALA Call to Service Corps AmeriCorps Project. She also works with several ALA national committees. In her role at ALA, she often gets to talk with applicants who are considering a year of service and points them to sites that might meet their interests. But promoting a year of service doesn’t stop there for Sharon; she’s even encouraged some family members to join. Through it all, Sharon is grateful to AmeriCorps for giving her a unique opportunity to serve the ALA differently than most of her fellow members. Additionally, Sharon has started an Auxiliary chapter in Washington DC.