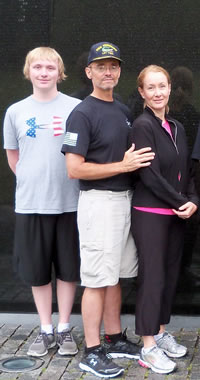 Lisa Ziehmann (right) with her husband and son after washing the Vietnam Wall in August 2013.

Lisa Ziehmann joined the American Legion Auxiliary in 2013 though her husband’s service in the Marine Corps and Navy. She is also the daughter of an Air Force navigator, and as such, her motivation to give back to veterans, servicemembers and their families is rooted in her upbringing. As a military spouse and growing up around other military families, she has first-hand experience and appreciation for the dedication, service and sacrifice of our servicemembers and their families.

Lisa joined the ALA because she wanted to show her appreciation for our veterans, servicemembers and their families through activities that might not receive much recognition outside the military community. Being a member is her way to say “thank you” to those in the veteran and military community that she’ll never get to meet in person, but hopefully will have an impact on their lives. For anyone not familiar with the ALA, Lisa’s message is simple: this is an organization of volunteers that understands a higher calling in life in service to our military community.

ALA members are women of service, and Lisa’s favorite service project with the Auxiliary to date was joining in washing the Vietnam Veterans Memorial (or the Vietnam Wall) with Vietnam Veterans of America Chapter 641. She was a very young child during the end of the Vietnam era, and did not understand (nor appreciate) the conditions under which our servicemembers returned home from war. Lisa said, “I found it absolutely humbling to be in such a revered spot to honor those that paid the ultimate price – and to pay tribute to the veterans still with us today and show my support and thanks for their service.”

Outside of the ALA, Lisa is a dedicated public servant with over 26 years of federal government service. She is the proud mother of a son who just started college at James Madison University. Lisa and her husband are avid Washington Nationals fans, so you can catch them at most home games.