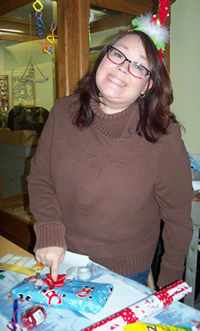 Lauren Lloyd joined the American Legion Auxiliary in 2013 though her husband’s service in the Air Force and she is a charter member of ALA Unit 1 in DC. She is also the daughter of an Army veteran and committed to giving back to military servicemembers and their families. It was the Auxiliary’s longstanding dedication to serving our military servicemembers and their families that drew her to the organization.

However, she candidly shared that she thought the ALA was “something that my grandmother was a part of”, and that she didn’t think it was something she could be a part of or active in. She didn’t even know she was eligible to join until a colleague asked her to join a unit that she was helping to start. Lauren liked the idea of being a part of history and joining something that was new. Now she looks forward to the events and getting together with others who want to serve as well!

ALA members are women of service, and Lauren’s favorite service project with the Auxiliary to date was preparing meals at the DC Fisher House for the 9/11 National Day of Service in 2013. Lauren said, “It was nice to sit with the families and get to know them and let them take their mind off of why they were there.” While at the Fisher House, she even met an Army veteran who had been stationed at the same Army base that she was at in Japan as a young child. “It’s always a reminder that the military really is a community even though we span generations and the globe.”

Outside of the ALA, Lauren loves to travel and learn about different cultures. Cooking and sharing food with people is one her favorite things. She calls Japan, Florida, Texas and now Virginia home.